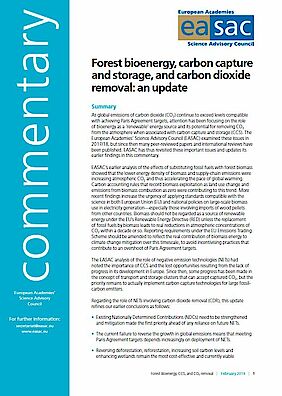 During 2018, the EU’s Renewable Energy Directive (RED) has been revised, and the EU has also envisaged that carbon dioxide removal (CDR) may be deployed post-2040. EASAC contributed to debate through its analyses of the net climate impacts of forest bioenergy use (EASAC Report 32 and 2018 statement on carbon neutrality], and the potential for CDR through the application of negative emission technologies (NET) (EASAC Report 35). Since these reports were published, scientific papers have continued to emerge, and analyses have been completed by the IPCC and other national academies, so we decided to update our earlier analyses in the light of recent increases in scientific knowledge.

The Commentary was released in February 2019 and, among its conclusions were: