EASAC and the Smart Villages Initiative (SVI) are publishing their recommendations for energy access in off-grid communities that could transform the lives of millions of people in the developing world. With their statement, EASAC and SVI want to inform European policy-makers and NGOs working on International Development and Cooperation. 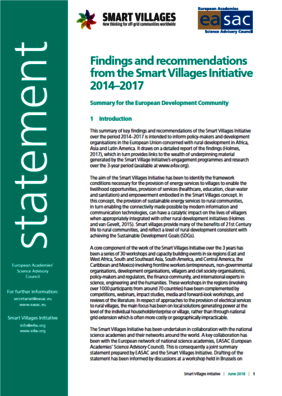 EASAC and the SVI have been cooperating since 2012, on initiative of the EASAC President at the time, Prof. Sir Brian Heap, FRS. EASAC has collaborated with the SVI in a number of ways and has supported the initiative’s important work with communities in developing countries. In 2015, an EASAC Expert Group was formed, consisting of outstanding European scientists with an academic background and/or work experience in international development. This Expert Group contributed to the drafting of the joint EASAC-SVI Statement „Findings and Recommendations from the Smart Villages Initiative 2014-2017“.

EASAC and SVI are addressing a formidable global challenge. Worldwide, more than 1 billion people are still without electricity. Most of them live in remote rural communities in developing countries. In a three-year field study, the SVI took a rare bottom-up approach by bringing together key frontline stakeholders – entrepreneurs, scientists and engineers, villagers, NGOs, financiers, civil society and development organisations, policy-makers and regulators – to determine whether off-grid renewable energy combined with technology leapfrogging can provide a catalyst for sustainable development and lead to the emergence of “Smart Villages”. Between 2014 and 2017 the SVI ran 15 workshops across East Africa, South and Southeast Asia, and South America with over 600 participants.

The aim of the initiative over the period 2014-2017 has been to identify the framework conditions necessary for the provision of energy services to villages to enable the livelihood opportunities, provision of services (healthcare, education, clean water, and sanitation) and empowerment embodied in the Smart Villages concept. In this concept, the provision of sustainable energy services to rural communities – which enables the connectivity made possible by modern information and communication technologies – can have a catalytic impact on the lives of villagers when appropriately integrated with other rural development initiatives. Smart Villages provide many of the benefits of 21st Century life to rural communities, and reflect a level of rural development consistent with achieving the Sustainable Development Goals (SDGs).

The main conclusion of this wide-ranging engagement is that off-grid Smart Villages can provide a sustainable development solution for even the remotest locations and realising SDG7‘s goal of Energy Access for All and other related SDGs. To enable this vision to be achieved, EASAC and the SVI call for governments to devise and adopt clear integrated off-grid and grid extension strategies, as well as listing six areas of concern that need to be addressed to enable sustainable development for poor rural communities:

Professor Thierry Courvoisier, the President of EASAC, said: „EASAC decided to join forces with the SVI as we wanted to make a science-based contribution to the important European debate on International Development and Cooperation. Together with the SVI it was possible for us to identify an area where innovative science-based solutions can have a catalytic impact on the lives of many millions of poor people worldwide. For us, it was important to get the voice of European scientists behind the study. We hope our recommendations can contribute to the creation of Smart Villages around the globe.“