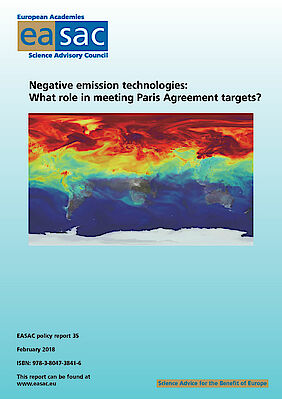 Negative emissions technologies (NETs) – new technologies that aim to remove excess CO2 from the atmosphere – have “limited realistic potential” in meeting the Paris Agreement targets, according to a new report published yesterday by the European Academies’ Science Advisory Council, a body that brings together 29 European national science academies. The academies call for climate change mitigation efforts to be strengthened instead of relying on these (future) technologies.

The report finds that none of the NETs mentioned in the Intergovernmental Panel on Climate Change (IPCC) models can be deployed fast enough or can remove the gigatons of carbon that would be necessary. Moreover, the authors find the large-scale deployment of NETs “would result in high economic costs and likely major impacts on terrestrial or marine ecosystems.” The report notes that analyses of NETs have paid insufficient attention to impacts on the planet’s ecosystems. NETs include capturing carbon by using forests, carbon-friendly agriculture, bioenergy with carbon capture and storage (BECCs), enhanced weathering, ocean fertilisation, and direct air capture and carbon storage (DACCs).

The IPCC scenarios are highly dependent on the successful deployment of NETs. Of the scenarios listed in the IPCC database, the report notes that 344 of 400 – 86 per cent – of the scenarios that have a 50 per cent or better chance of meeting the Paris Agreement targets rely on “successful and large-scale deployment” of negative emissions technologies. “Without assuming that technologies can remove CO2 on a large – gigatons of carbon – scale, IPCC scenarios have great difficulty envisioning an emission reduction pathway consistent with Paris targets,” states Professor Mike Norton, Director of the Environment Programme at the European Academies’ Science Advisory Council (EASAC).

The authors of the report call for stronger attention to climate change mitigation today rather than waiting for the technologies of tomorrow. “Relying on NETs to compensate for failures to adequately mitigate emissions may have serious implications for future generations”, notes Professor Norton.

Nevertheless, the report notes that NETs may still have a useful role to play in addressing climate change, albeit at a smaller scale. The feasibility of implementing these technologies is likely to be location-, technology-, and circumstance-specific.

The IPCC’s Synthesis Report estimates that only 1000 billion tonnes (1000 gigatonnes (Gt)) of CO2 can be emitted between 2011 and 2100 for a 66% chance (or better) of remaining below 2°C of warming. According to the EASAC report, “Since the [IPCC] report’s publication, more than a fifth of the remaining budget has been emitted in just the past 5 years, and staying within this budget requires an end to carbon emissions from fuel production and energy conversion, transport and energy use by 2050.”