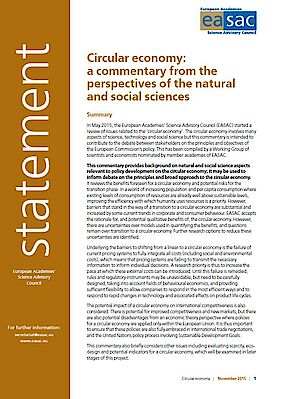 The circular economy has been a controversial issue since the new Commission cancelled the previous 2014 proposals and undertook to issue a new Circular Economy package by the end of 2015. In response, EASAC set up a Working Group of scientists and economists to provide inputs from the natural and social sciences to the debate on the principles and objectives of the European Commission’s policy.

The EASAC Commentary includes a detailed discussion from natural and social science perspectives of the underlying issues. It includes discussion of some of the history in evolution of political debate from recycling, resource efficiency to the current term of ‘circular economy’, and also summarises the basic conclusions of recent studies of potential benefits foreseen for a circular economy.

With much emphasis expected to be placed on recycling rates, the report discusses how these have to strike a balance between resources recovered and the investment of energy and resources used in recycling, and highlights some of the priorities in recycling certain elements. It then moves on to the basic economics and the intimidating barriers which exist and cause the linear economy stay linear. These include increasingly fast turn-around driven by fashion rather than obsolescence (e.g. clothes and electronic devices).

Effects on economic competitiveness are still unclear with evidence for and against improved competitiveness. However the danger of negative effects is increased if the circular economy is applied only within the EU, so this may be important within the current negotiations on trade partnerships (TPP, TTIP). Other issues include the selection of indicators for a circular economy which are appropriate and other general policy issues and instruments.