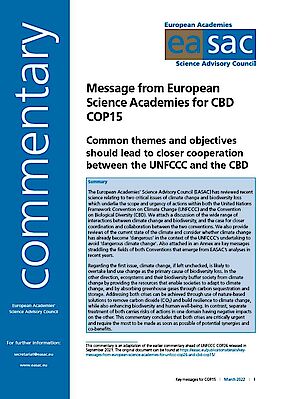 The European Academies’ Science Advisory Council (EASAC) has reviewed recent science relating to two critical issues of climate change and biodiversity loss which underlie the scope and urgency of actions within both the United Nations Framework Convention on Climate Change (UNFCCC) and the Convention on Biological Diversity (CBD). We attach a discussion of the wide range of interactions between climate change and biodiversity, and the case for closer
coordination and collaboration between the two conventions. We also provide reviews of the current state of the climate and consider whether climate change has already become ‘dangerous’ in the context of the UNFCCC’s undertaking to avoid ‘dangerous climate change’. Also attached in an Annex are key messages straddling the fields of both Conventions that emerge from EASAC’s analyses in recent years.

Regarding the first issue, climate change, if left unchecked, is likely to overtake land use change as the primary cause of biodiversity loss. In the other direction, ecosystems and their biodiversity buffer society from climate change by providing the resources that enable societies to adapt to climate change, and by absorbing greenhouse gases through carbon sequestration and storage. Addressing both crises can be achieved through use of nature-based solutions to remove carbon dioxide (CO2) and build resilience to climate change, while also enhancing biodiversity and human well-being. In contrast, separate treatment of both carries risks of actions in one domain having negative impacts on the other. This commentary concludes that both crises are critically urgent and require the most to be made as soon as possible of potential synergies and
co-benefits. 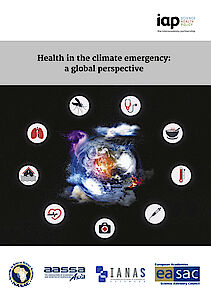