In its latest report, EASAC outlines the major potential benefits of space science for research, explores the economic, political and social arguments for choosing automated or human missions, and recommends the adoption of an overall strategy to ensure opportunities are not lost. It also urges a strategic rethink in Europe's options for the continued exploration of the solar system. 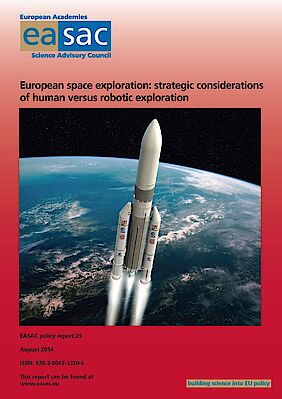 Taking account of the various complexities of space science and space exploration, the report addresses the requirements of fundamental research driven by scientific enquiry, strategies for contributing to solar system exploration with robotic missions, as well as the added value associated with human space flight, and the applied science questions (e.g. space medical and biotechnology sciences) which must be pursued in the context of human space flight.

A number of general recommendations related to the future European space exploration programme are presented, underpinned by the importance of Europe remaining at the forefront of scientific and technological capability in space. It is argued that a strategic plan for the cost share between robotic and manned missions in European space exploration, capitalising on technological advance and international cooperation, but without negatively impacting the future of pure scientific research, is highly desirable.

The EASAC report has been prepared to assist politicians, advisory bodies, and funding authorities, as well as the interested public, to understand the various arguments put forward to justify both future space exploration and Europe’s potential role.

The report was officially launched at an event at the Embassy of Switzerland in Paris on 15 September 2014.