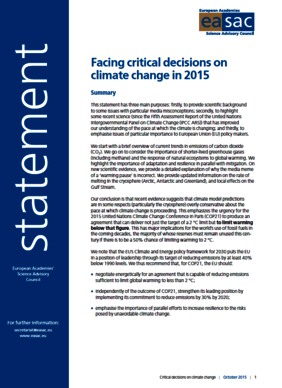 EASAC's latest statement ”Facing critical decisions on climate change in 2015” relates to some of the scientific issues which will be very important to consider in the forthcoming negotiations at COP21 in Paris. Our analysis concludes that recent evidence suggests some climate changes are proceeding faster than models would predict - especially in the cryosphere. The national science academies of the EU Member States thus urge national governments within Europe and the European Commission to play an active role in Paris in seeking a comprehensive agreement which will limit future warming to below the 2 degree target to avoid dangerous climate change.