Groundwater in the Southern Member States of the European Union 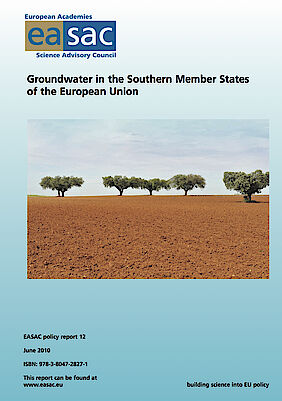 What is the importance of groundwater for Europe?

When rain or snow falls on land, some of the water runs into rivers or lakes and some is released back into the atmosphere through evaporation and transpiration (or alternatively combine as "evapotranspiration"). Much of it, however, collects in the ground where it is taken up by cracks and pores in rocks and soils. The distinct underground areas where groundwater collects are known as aquifers; in the terminology of the Water Framework Directive (WFD), these are also known as groundwater bodies. Groundwater, drawn up from aquifers in wells or boreholes, is an important resource and is widely used
in Europe for agricultural irrigation and for domestic purposes, including drinking. There is an important distinction to be made between "blue water", stored in surface waters and groundwater bodies, flowing through rivers and aquifers, and "green water", which is stored in the pores of the soil, taken up in plants and released back to the atmosphere through evapotranspiration.

Within the European Union (EU), it is recognised that groundwater is a valuable resource. The WFD of 2000 (200/60/EC), a major piece of EU legislation, contains measures that are designed to protect it. However, there are considerable differences in the availability of groundwater and in the pattern of demand for it across the EU and these are not explicitly recognised in the Directive. The consequence of this is that, although many EU Member States have found it possible to implement measures that will ensure that the aims of the Directive for groundwater protection will be achieved, in other parts of Europe this remains a challenge and it may not be possible to achieve the aims specified.

The science academies of the Southern European Union Member States (SEUMS) have collected evidence on the importance, current status and use of groundwater within the region in order to report on the sustainability of these resources and their future development, in agreement with the goals of the WFD.

What is distinct about groundwater the SEUMS?

The evidence from the different Member States shows that there are many common factors across the Southern European region. Throughout the SEUMS, with the exception of France, the largest single use of blue water is for agriculture, amounting to up to 80% of all water consumption, compared with an EU average of 24%.

Groundwater makes a major contribution to this, up to 65%, in Portugal. This compares with a European average of 23% of agricultural water sourced from groundwater. By contrast, the proportion that groundwater contributes to domestic use in the SEUMS is close to the European average of about 55% of the total (European Environment Agency 2009). There are strong geological similarities across the SEUMS. Aquifers in this region are of broadly similar kinds. Environmentally, they are subject to a similar range of pressures from the use of agricultural chemicals, urbanisation and the growth of tourism. There are also parts of the region where the industrial legacy has added to the pollution of groundwater. There are also signifi cant problems associated with the recent uncontrolled increase in pumping rates in the region, in particular impacts on surface ecosystems and the degradation of groundwater quality. However, it is recognised that the use of groundwater has produced considerable advances in rural economies of the SEUMS. It is also a resource that is used with care; in many parts of the region evidence shows a considerably greater economic and hydrological effi ciency in the use of groundwater than in the use of surface waters for agricultural use.

What are the main concerns about groundwater in the SEUMS?

A common concern across the region is the rapid growth in the number of users of groundwater, which has, in many parts, led to a signifi cant unregulated community of users. In some parts of the SEUMS, these unregulated users are in number equal to the regulated sector and make a similar level of demand. This rapid growth in unlicensed pumping is considered a major issue in the accuracy of current estimates of extraction rates. It also creates a signifi cant social and political obstacle that has to be overcome if good management of aquifers is to be achieved in the SEUMS.

In some parts of the region there are also concerns about groundwater pollution due to the (mainly) historic uncontrolled use of land, including the pollution of groundwater by nitrates. This is by far the major issue in some parts of the SEUMS, for example in Italy. Even though groundwater may be abundant, it is increasingly vulnerable and has to be considered increasingly unreliable as a source of future drinking water supplies.