First Challenges and Prospects of the Cyprus Academy of Sciences, Letters, and Arts 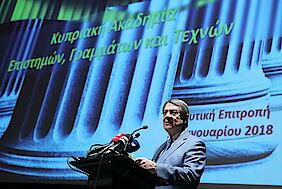 The President of the Republic of Cyprus Mr Nicos Anastasiades

The Founding Committee of the Cyprus Academy of Sciences, Letters and Arts has organized its first event entitled "First Challenges and Prospects". The purpose of the event was to present the foundation of the Academy's legal status and its organizational process until its full operation.

The President of the Republic, Mr. Nikos Anastasiades, expressed his satisfaction for the realization of the historic event, as he described it, which constitutes the highest intellectual institution of our country. The President of the Republic in his greeting pointed out also that the initiative of the Ministry of Education and Culture for the creation of the Cyprus Academy of Sciences, Letters, and Arts was universally accepted by the scientific, artistic and political world of our homeland. "This can only satisfy us, particularly, since it is recognized by both organized entities and individuals, that by the creation of the Cyprus Academy we achieve the exploitation of the most notable intellectuals of our country to the promotion of excellence in all manifestations of the intellect and to the cultivation and promotion of sciences, letters, and arts", said Mr. Nikos Anastasiades.

From his side, the President of the House of Representatives, Mr. Dimitris Syllouris, said in his welcome speech: "An infrastructure is being created today for the intellectual and cultural life of our country, which must and can be the crown of intellectual and cultural activity in Cyprus". Referring to the Parliament’s role, he noted that the founding document of the Academy was addressed with seriousness, dignity and most importantly, with respect, from the early stage of the drafting and its discussion in the Education Committee until its final unanimous voting by the Parliament.

Welcoming the event, the Minister of Education and Culture, Dr. Costas Kadis, stressed that he honors the Ministry of Education and Culture and our country in general, noting the following: "The Ministry of Education and Culture had the objective to contribute decisively to the upgrading of the scientific, intellectual and cultural development of Cyprus, as well as promoting the work of distinguished intellectuals in the international field." In conclusion, he thanked the Founding Members of the Academy, Professors Loucas Christophorou, Christophoros Pissaridis, Kyriakos Nikolaou and Vassos Karageorghis, who, with their contribution, made this great challenge to Cyprus a reality.

The President of the Council of the Academies of Sciences of the European Union, Professor Thierry Courvoisier, expressed his congratulations on the successful establishment of the Cyprus Academy of Sciences, Letters and Arts. He also attended and welcomed the first event of the Cyprus Academy. In his speech, he stated: "You are creating a tool that will strengthen your society today, which will help your scientific community integrate better in Europe and at the same time strengthen Europe in achieving its goal of to make the best possible use of the intellectual potential of all its populations for a better future. "

Professor Vassos Karageorghis, a member of the four-member Founding Committee, welcomed the event stressing: "We are pleased to see the organization of a large scientific family of Cypriots to promote our country internationally, to guide the development of scientific research in cooperation with all universities and research institutes of the country, and become government advisors on scientific research and culture."

Their messages about the goals and work of the Academy, expressed through the visualized messages, the two Founding Members, Sir Christoforos Pissarides and Professor Kyriakos C. Nicolaou.

The next steps regarding the organization and operation of the Academy were presented by the fourth member of the Founding Committee, Professor Loucas G. Christophorou, who welcomed with great pleasure and satisfaction the unanimous voting  of the Founding Law of the Cyprus Academy of Sciences, Letters and Arts on 10 November 2017 , by the House of Representatives stressing that the Cyprus Academy is the Highest  Institution of Cyprus in Sciences, Letters, and Arts, independent and completely autonomous in terms of its objectives and work.

He thanked the Cyprus Political Leadership and the President of the Republic personally because they embraced the entire project enthusiastically. Christophorou said: "I wish all of us together to continue, confident that we will leave a high stock to the next generations.  The Founding Committee hopes that the most prominent personalities of Cyprus will be among the Candidates for Founding  Permanent Members of the Academy. I am convinced that, with the help of the State and our Political Leadership, and with the active support of the Ministry of Education and Culture, the Founding Committee will appropriately organize the Cyprus Academy of Sciences, Letters, and Arts and will establish solid foundations for its operation, in order to make the Academy the Lighthouse that will spread its light in Cyprus, the wider region of the Eastern Mediterranean, the European Union, and internationally."