EASAC's policy report on "Valuing Dedicated Storage in Electricity Grids" was launched at the start of EU Sustainable Week (EUSEW) on Monday June 19th 2017 in the Palace of the Academies, Brussels. 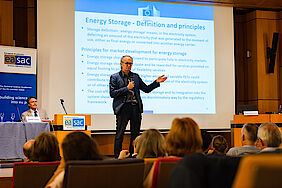 Further explained and discussed on Wednesday 21 June at an event on energy storage within the EUSEW policy conference.  The report was presented at both events by the Chairman of the EASAC working group on storage, Prof Mark O'Malley from the Royal Irish Academy, which had helped to finance its preparation.

Large scale electricity storage is making a come-back because it can contribute to the flexibility which is needed by system operators to manage the increasing penetration of variable renewable electricity generation on the grid. At the same time, the interest of householders in small scale storage for self-consumption has already led to more than 40,000 small household PV plus battery systems being installed in Europe since 2013, mainly in Germany.

EASAC's team of scientists nominated by Europe's 28 national science academies has been working for two years to develop an independent view for EU policy makers of the value of dedicated storage on electricity grids from a scientific perspective. Their report concludes that the value of storage is system dependent and that it can contribute to balancing, reserves, capacity and generation adequacy as well as congestion management. However, in electricity markets, it must compete with flexible generation, demand response, interconnections, and curtailment.

Positive reactions to the report were given at the launch meeting by Claude Turmes MEP who responded from the European Parliament and by Tudor Constantinescu, Principal adviser to the Director General of DG Energy who responded from the European Commission. The report triggered animated exchanges at the launch event between discussion panel members from SEDC, ENTSO-E, EFET, EASE and CEER, as well as challenging questions from the audience, which included officials from the European Commission, European Parliament and EU Member States, as well as experts from the IEA, renewable energy industries, utilities, universities, academies, NGO's and consultancies. 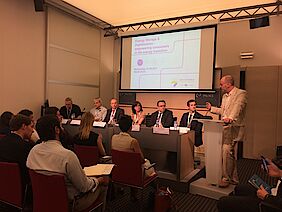