Direct-to-consumer genetic testing for health-related purposes in the European Union: the view from EASAC and FEAM 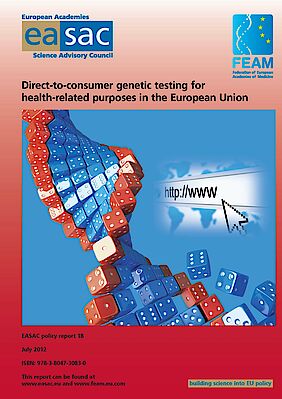 Until recently, human genetic testing was mainly confined to specialist medical genetic services, traditionally focusing on the relatively rare inherited disorders. However, the rapid pace of advance in DNA analysis has led to increasing interest in the development of genetic tests for determining susceptibility to the more common, complex, disorders. Such tests are increasingly being offered by companies through the internet. These consumer genetic services raise scientific, regulatory and ethical questions.

The report from EASAC and FEAM identifies a broad range of issues relating to regulation of services, support for research and innovation, professional development and governance, and public engagement. Recommendations are addressed primarily to policy-makers at the EU level, particularly with regard to revision of the Directive on In Vitro Diagnostic Medical Devices and the importance of ensuring that claims about the link between genetic marker and disease are scientifically valid, but also in the Member States where complementary actions are necessary.

This is the report of the first joint project between EASAC and FEAM, initiated to draw upon the widest possible expertise in the scientific disciplines and experience in the Member States. The project was part-funded by the InterAcademy Panel with the aim to build competence for joint work between the academy networks. This first output illustrates the success of such collaboration in generating added value, and is a sound basis for future joint work on topics of mutual interest.