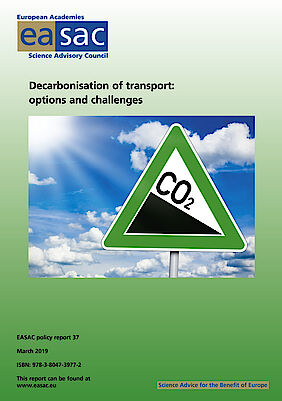 The GHG emissions from the European transport sector currently represent approximately 24% of total GHG emissions from the EU and are dominated by those from passenger cars and light duty vehicles (53%), whilst those from heavy duty vehicles and buses are 19% and those from maritime transport ~13% and from aviation ~13%. Overall, road transport currently produces 17% of the EU’s total emissions.  The project, which was led by the Swiss Academies of Arts and Sciences began with a workshop on 4 July 2017, where the EASAC experts met together with experts from the European Commission and stakeholders from the transport sector to discuss the challenges being faced by EU policy makers in this field.

On the basis of these discussions, the working group decided to focus its work on road transport and to bring together data and evidence from the scientific literature and independent reports.  As a result, a new EASAC report was published in April 2019.

The new EASAC report reviews options for reducing greenhouse gas (GHG) emissions from European transport.  It argues for stronger policies to support the phasing out of fossil fuels because of the huge gap between the GHG emissions which will be delivered by current policies and the levels needed to limit global warming to less than 2°C or even to 1.5°C (Paris Agreement).  It recommends a combination of transition policies (until 2035) and sustainable policies for the long term, split into three groups : avoid and contain passenger and freight transport demand; shift to transport modes with lower emissions (including trains, buses and ships); and improve performance through vehicle design, more efficient powertrains and sustainable energy carriers (including low carbon electricity).