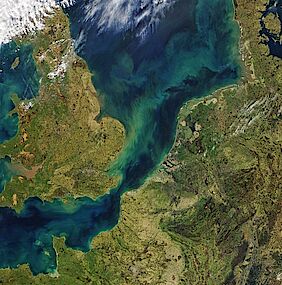 The state of the ocean is at the heart of European climate and living conditions. The Atlantic Meridional Overturning Circulation (AMOC) exerts significant influences not only on Europe’s coasts, but also on large-scale climate in Europe: through its net northward heat transport in the Atlantic, it is responsible for the relative warmth of the Northern Hemisphere. However, there is evidence the AMOC is weakening, and this weakening is predicted to be exacerbated by global warming. This study examines the potential implications for Europe of major changes in ocean circulation arising from global warming.

Focussing on Atlantic coastal regions, estuarine gateways and the Baltic, a Working Group of European experts will review the scientific evidence to identify the effects of current and future changes in

With a view on potential impacts from effects on physical characteristics of the European coasts, altered weather patterns, and altered distribution of marine resources and corresponding effects on the blue economy, the Working Group will develop science-based recommendations for adaptive marine and coastal management over different time spans, evaluate existing policy initiatives, and identify knowledge gaps and existing uncertainties in scientific knowledge.

This project follows on from the initial identification of this issue in the EASAC 2018 extreme weather update. An expert group has been established and held meetings in 2019 and 2020. The project is expected to be completed by the end of 2021.