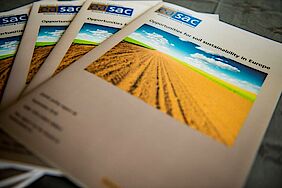 The pressures on maintaining the sustainability of Europe's soils and their ability to meet targets of food production, biodiversity, maintenance or increasing soil carbon content and other issues were addressed in a project led by the Royal Netherlands Academy of Arts and Sciences (KNAW). This produced a detailed analysis of current issues and opportunities in delivering sustainability of Europe's soils, which was released in September 2018.

The report examines the threats to the sustainability of soils, the potential contribution to worsening or mitigating climate change, the importance of soil biodiversity, and interactions between soil health and human health.  In particularly the report looked at the policy measures necessary to secure the capacity of soils to deliver goods and services in a rapidly changing world, and provide scientific guidance on how to support policy on sustainable and multifunctional soil management. Among its policy-relevant findings were: